My experience with being attacked by a botnet

It all began when I discovered a Discord server selling botnets and DDoS attacks one day. *If you're unfamiliar with the term, a botnet is a collection of compromised machines that hackers frequently employ to attack websites. Because the computers all have distinct IP addresses, the attacks can't be transferred because you won't be able to tell which traffic is legitimate and which is botnet traffic. * 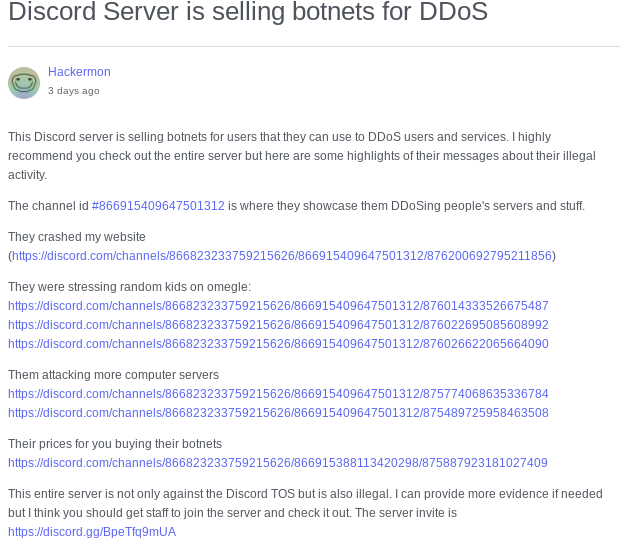 I started chatting on the server once I joined. They then decided to start a DDoS attack on my website for whatever reason (the site you are one you are on right now). Thankfully, Replit (the platform I use to host my sites) prevented the attacks from reaching my repl, and they were only able to cause little harm.

Attacks on my network

I'm still not sure how they got my IP address, but they did and began assaulting it with their botnet. My internet connection fell down, and I quickly knew what was wrong, so I proceeded to the server via a hotspot. They attempted to deny assaulting my network, but when I provided proof that they had done so, they began to make excuses. My internet provider had given me a static IP address for some reason (which means I couldn't change it by restarting my router), so the DDoS attacks lasted for almost 5 hours before they finally ended.

My internet provider was able to issue me with a new IP address.

I also discovered that one of their members had been arrested by the FBI for attacking a federal website.

Edit They created a new server and I reported it again and the server has now been deleted again.